Transformative use of a building: does it infringe architect's moral rights? 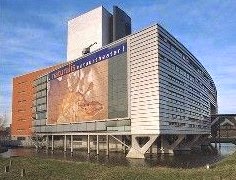 A recent article in the NL Times, here, raises an issue which reflects a popular exam question for copyright students. The article is "Architect sues Leiden museum on copyright charge" by Hanna Daych and it reads, in relevant part (with links added):


Architect Fons Verheijen is planning legal action against the Naturalis Museum in Leiden, whose exhibition space building he designed. He argues that the museum is violating Dutch copyright laws by transforming the exhibition space into a storage facility and office space.

“They’re mutilating the building,” Verheijen told NL Times. “Somebody who creates art cannot have their work mutilated. Transforming my exhibition space into a storage space is mutilation.” ... [H]e plans to begin legal proceedings against the museum in April. His aim is to force the museum to scrap its current plans. ...

“My building is of a high architectural quality; it should not be used for storage,” Verheijen said. He insists that the existing exhibition space should be maintained and recommends the museum instead build an extension onto the current space for the office and storage requirements. “I’m not against another architect designing that,” he noted.

Architect Michiel Riedijk understands Verheijen’s disappointment. “But a client always has the right to make modifications to a building. Our work is a product and not an autonomous work of art, such as a painting. We are articulating his design rather than inflicting an injustice to it,” he said in an article in de Volkskrant. ...

This blogger loves the line about "we are articulating his design rather than inflicting an injustice to it" and wishes he had composed it. Having said that, copyright does not impose a binary system on the outcomes of intellectual creativity. It is open to an initiative to be both an articulation of a design and injustice to it.  Since there is no accounting for taste, no attempt will be made here to predict the outcome of the forthcoming legal proceedings -- though readers will doubtless have their own opinions.

Email ThisBlogThis!Share to TwitterShare to FacebookShare to Pinterest
Labels: architecture, change of use, distortion or mutilation, moral rights, Netherlands, work of art