Last year saw several claims by Cambodian officials in respect of art they allege was looted from Cambodia during the Khmer Rouge regime. One of the claims was to a statue in the Cleveland Museum of Art collection, which the Cambodian cultural authorities say was looted from Prasat Chen, a 1000-year-old temple about 75 miles northeast of the better known Angkor Wat. 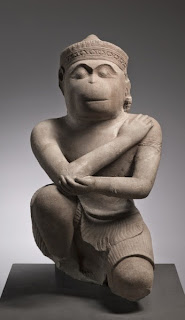 This month, the Cleveland Museum announced that after lengthy investigations they have determined that the statue is not from from Prasat Chen.


During the winter, the museum sent curator Sonya Rhie Quintanilla to Prasat Chen, a site of temple ruins 180 miles northwest of Phnom Penh.

Based on her research, the museum said it has ruled out Prasat Chen as the sculpture's original location, although it said it could not rule out the possibility that it may been removed illegally from some other site.

To check whether the work came from Prasat Chen, Quintanilla, the museum's curator of Indian and Southeast Asian art, carried in her luggage a lightweight plastic resin facsimile of the base of the Cleveland sculpture.

When she reached the site, where a thousand-year-old temple features sculptures that narrate Hindu legends, she said she found that the facsimile did not fit the two spots where the museum's Hanuman sculpture logically might have been located.

While perhaps some kudos to the museum for doing some homework, is it really sufficient to say that the statue was not looted because it doesn't fit onto a particular base? I would have expected the museum to concentrate on proving the statue's provenance by reference to its ownership history. Who sold it to the museum? What background checks were performed? etc.

And, granted, the museum is said to be looking into this too. Nevertheless, it seems a bit premature to say the statue is not from Cambodia based on....essentially...a base.