It looks like the seller of the 18th century antique Chinese vase that broke all the records when it was "sold" at auction in 2010 will finally see a return. 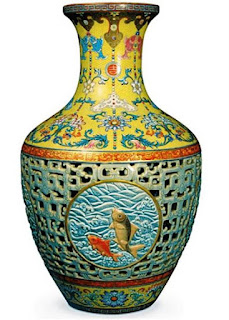 Many will recall that back in 2010 this vase, created in China during the reign of Emperor Qianlong (1736-95), was sold at auction for £43m. The buyer, reportedly one of the richest men in China, was to pay this sum, plus the auctioneer's, Bainbridges, commission of £8.6 million. The Sellers, who had found the vase in their attic, were set for an incredible pay day.

Unfortunately, the deal stalled when seller refused to pay the Bainbridges' commission. It seems that it was part of the conditions of sale imposed by Bainbridges that a flat commission of 20% of the purchase price be paid, rather than using a sliding scale, often used by the larger auction houses.

The Sellers were unable to do anything, due to the terms imposed on them by Bainbridges – preventing them from selling the vase through another auctioneer.

And Bainbridges could not move from their 20% without the risk of legal action from the underbidder.

There was then a lot of speculation as to what was actually happening, which Bainbridges could not address having signed confidentiality agreements with both the seller and the buyer.

Those darn lawyers and their contracts!

There then followed almost two years of negotiations between Bainbridges and the buyer – to no effect.

The good news is that Bonhams swooped in to save the day. They were approached by an interested party and were able to successfully broker a deal with Bainbridges and the seller. The result: an unidentified buyer from the Far East is believed to have paid around £25 million for the vase. The majority of this money is said to be going to the seller, but Bainbridges will also be compensated. In any case, I'd say there was plenty of pie for everyone. Hopefully, it is all written down in a helpful contract!