Widely reported in the last week is the arrest of Singaporean street artist Samantha Lo, known as SKL0 or the Sticker Lady.

Lo is said to be responsible for stickers which started appearing around Singapore, on traffic light buttons carrying slogans including "Press for good luck" "No need to press so hard"  "Press some more", as well as for spray painting slogans on roads. 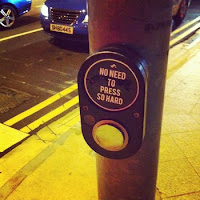 Singaporean police investigated the stickers and spray-painted slogans after the same were reported by the Land Transport Authority, identified SKL0 as the culprit, and arrested her for vandalism.

Under Singapore's Vandalism Act, a person who is convicted of vandalism shall be punished with a fine not exceeding $2,000 or to imprisonment for a term not exceeding to 3 years and shall be liable to caning subjected to the Criminal Procedure Code 2010 – although, Lo could not be receive the latter penalty as corporal punishment is prohibited for women.
An online petition has been set up (here) which calls for:
Obviously it seems harsh, particularly in light of all the street art we see in London, Europe and the US, for Lo to be liable for imprisonment.  It also does not appear to be disputed that Lo was seeking to be artistic, rather than to vandalise Singapore's public places. On the other hand, Singapore's harsh laws are well-known. Lo would clearly have been aware of the position in which she was putting herself and accepted the risks. Some might question the wisdom of pitting art against the law in a country like Singapore.

Source: The Guardian, Huffington Post
Posted by Simone at 00:00:00