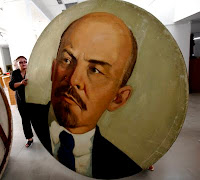 Is there such a thing as art which is not political? While some art is commissioned by, and indeed shaped by, the demands of a regime or of the individuals who hold its reins, other art is merely collected and exhibited by it, thereby acquiring a sort of taint by association which the artist may be unable to resist or reject. That same art might later be held as a sort of didactic hostage by a successor regime, as a means of reflecting badly on now-discredited leaders or parties.

In this context, readers may wish to take a look at the points made in the Guardian, by Jonathan Jones ("Saif al-Islam Gaddafi's art showed the grotesque symptoms of dictatorship") and by Maria Guineva, writing for novinite.com ("Bulgaria's Museum of Socialist Art - Hall of Fame or Hall of Shame").