For those of you who have been interested in the recent Russian themes explored on A&A, you may want to take yourself down to the Russian Criminal Tattoo Archive exhibition at 4 Wilkes Street in London’s East End. The exhibition, which opened yesterday, shows around 120 of the 3000 plus original ink drawings made by Russian prison attendant Danzig Baldaev. The drawings date between 1948-1986 when Baldaev worked as a warden in Kresty, an infamous Leningrad prison. Baldaev himself was an ‘orphan’ of the soviet system; his father having been denounced as an enemy of the people, Baldaev grew up in a Russian children’s home. 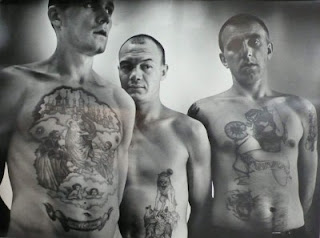 Having published three volumes of Baldaev's drawings in the Russian Criminal Tattoo Encyclopaedia series, Murray and Sorrell now launch their first exhibition, giving the public a rare chance to see the original drawings for the first time. The public may never have had the chance to see these works had Damon Murray and Stephen Sorrell of the design publishers Fuel not heard about it from a Russian literary agent. Upon hearing about the works they visited his widow in St Petersburg, where they found thousands of drawings of inmates tattoos stacked in bin liners. Baldaev’s widow did not know what to do with them, but she was concerned that her family would throw them out when she died. Murray and Sorrell bought them off her and published what became a hugely popular book series entitled the Russian Criminal Tattoo Encyclopaedia.

The tattoos formed a service record of a criminal's transgressions and whilst the KGB knew about Baldaev's project, surprisingly they sanctioned it, acknowledging the value of information recorded about a prisoner on their bodies. Each tattoo has a unique meaning: skulls denote a criminal authority; a scorpion a bodyguard; a cat a thief; crosses on knuckles show the number of times the inmate had been to prison; and a shoulder insignia marked solitary confinement. But tattoos also told a political story; a swastika was not indicative that the wearer was a fascist supporter, but instead represented a refusal to accept the rules of prison society, whilst a larger tattoo of manacled hands holding the Kremlin ironically refers to how the State is founded on corruption and signifies a "don" or boss.

The accompanying photographs by Sergei Vasiliev act as an important counterpart to Baldaev's drawings and allow us a glimpse into this compelling and extraordinary world. These incredible images allow the viewer a rare opportunity to delve into the ever-changing folklore of the Russian criminal underworld.

Don’t miss this opportunity to see this wonderfully unique and informative exhibition.